The Argus currently in dry-dock in Falmouth

RFA Argus at 37 years old is still an impressive sight. At 28,000 tonnes she’s not as heavy as the new Tide-class tanker acquisitions but she’s still an imposing sight. It wasn’t always like this. The Argus began its life as a container ship MV Contender Bezant in 1981.

A Brief History of Argus

The Falklands War would alter the MV Contender Bezant’s fate forever. In 1982 the ship was taken from trade by the MOD for service in the Falklands as an aircraft transport. The decision was made in 1984 to purchase the vessel outright. The following year Argus was converted into an aviation training ship by Harland and Wolff in Belfast. Today Argus is still used as an aviation training but it is perhaps better known for its role as a ‘hospital ship’ or in British military speak, a Primary Casualty Receiving Ship (PCRS). In 1991, Argus was fitted with hospital facilities for the first Gulf War. In 2007 the medical facilities were extensively upgraded and the ship’s primary role became that of the PCRS. In recent years Argus made the headlines for being part of the UK’s response to the Ebola outbreak in Sierra Leone.

The future: RFA Argus to be retired from service in 2024

The Argus is an essential asset for the British Armed Forces and the UK Government. As the only casualty receiving ship in the Navy she will always be a key player in any potential conflict that might arise. For the Government, as the recent Ebola outbreak showed, having the capabilities of a medical ship, allowed Britain to help lead the international effort. As a post-Brexit world looms over the horizon many are wondering about the UK’s global role. This is nothing new, no longer the ‘World’s Policeman’ since the decline of her empire, Britain has struggled to shape an international role in a post-imperial world. In recent contrast, the UK’s response to Ebola was refreshingly pro-active and a step above the majority of the international community. Perhaps least controversially the British Government had clear a purpose and objectives, best stated by the captain of the Argus at the time:

The purpose of the DFID mission is to increase the number of Ebola treatment units and Ebola beds and training ashore in Sierra Leone, and as such we are supporting that mission rather than actually using the hospital for Ebola patients.

Nobody could doubt that Britain’s role in the world has changed but since 1945 the country has remained a global player. This does not necessarily need to mean in terms of hard power. The UK has been ranked a top ‘Soft Power’ force. Either way Britain still needs credible assets if the Government wishes to fulfill its obligations.

The British Armed Forces have many a time played significant roles in disaster relief and humanitarian aid. There have been calls for the Department for International Development’s budget to be diverted into a struggling Ministry of Defence’s coffers. This has been an extremely controversial subject not helped by some poor choices by DFID. At the same time those on the left of the political spectrum abhor the idea of money that is supposed to fight overseas poverty and inequality going to the Ministry of Defence. The problem here comes back to the core issue of Britain’s struggle to understand its international role and how to categorize its spending. If the UK is to remain a global partner it will need to continue to fund assets such as the Argus in order to perpetuate capability. Sadly thus far, this is no planned replacement in the works for this ship. Like other RFA ships, it risks being quietly being removed from service and unlike Royal Navy ships, there will be no decommissioning ceremony to attract the media or crowds. By quietly removing assets from the inventory we risk playing on our historical reputation alone. This can only work for so long. It has been too easy for the Governments of the past and now to ride on the public’s lack of general knowledge on the subject of defence to make cuts and reduce capability.

If the Argus is to be replaced, which it will need to be as it’s the only ship of its class, the development stages will need to start within around two years. The recent Tide-Class tankers began development in 2012 with the first of the class entering service in 2017. The Norwegian navy acquired a variant of the Tide Class, the 26,000 tonne HNoMS Maud. This ship is lighter than the British variant but will contain a 48 bed hospital including an Operating Theatre, Isolation ward and CT scanner. This is slightly smaller than the 70 beds onboard the Argus but Maud is not specifically designed for Hospital requirements, she is a multi purpose vessel supporting:

The Norwegian Armed forces are smaller and have differing priorities and in some respect cannot be compared so easily to the UK’s blue water navy. Norway currently commits around 1.56% GDP to defence spending. Like many NATO members, this falls short of the 2% target. Thus Noway, like the UK is facing a squeeze on its defence spending. If the UK Government is unwilling to spend on a like for like replacement for its Primary Casualty Receiving Ship, it would leave the following options:

The final option would perhaps be good for everyone. As a fully fledged Hospital ship its role will be international assistance when required but also offering support to the Armed forces when needed. Other nations such as the USA, China, Brazil and Russia all operate Hospital ships that come under the jurisdiction of International law. 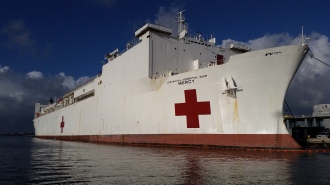 By having DFID fund a Hospital ship, it would help the agency to pursue its own stated agenda and as such should silence those who would complain of commandeering of the budget by the MOD:

The UK operated has operated Hospital ships in one way or another since the 17th century. It would be a shame to lose an essential capability that could be required at any potential outbreak of violence or disease. Hospital ships represent a helping hand, a sign of hope. As the UK ponders it future global role a continuation of this capability marks a step in the right direction.

2 thoughts on “RFA Argus: Maintaining and looking towards the future”

Just another day in paradise